One of the most distinguished Polish jazz pianists, master of improvisation – Adam Makowicz – performed on 23rd November 2018 in the Concert Hall in  Jordanki, accompanied by the Toruń Symphony Orchestra. In the first part of the concert the piece  The Battle of Siddim by Johnny Hachem was presented, who also participated in this event. The second part of the concert included the pieces composed by Adam Makowicz, the works of Frederick Chopin and the Rhapsody in Blue by George Gershwin. For the needs of the concert organized by the Toruń Symphony Orchestra, the Concert Hall was prepared in the configuration without two trapdoors, with the application of the fixed and mobile proscenium (the fixed proscenium was enlarged by the trapdoor of the orchestra pit and of the auditorium used to change shaping of the floor of the audience and for transportation of  platforms). This kind of hall arrangement is often used by the orchestra for the needs of symphonic concerts. 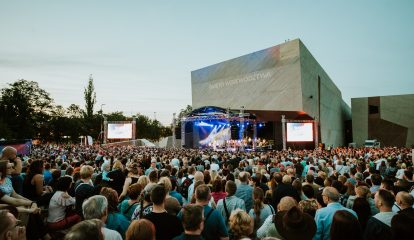 Concert Hall with an extended proscenium


Warning: Invalid argument supplied for foreach() in /beta_fs/wp-content/themes/FABRIC/article-part-modules.php on line 290